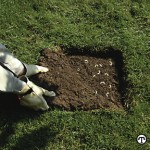 According to the most recent study by the U.S. Department of Agriculture, Japanese beetles cause more than $420 million in damage annually to trees, plants, flowers and vegetables. But did you know that Japanese beetles actually begin their lives underground as grubs? If left unchecked, grubs will damage your lawn. This one-two punch can create havoc in your landscape and cost you a bundle of money.

Japanese beetles are in most states east of the Mississippi River, and partial infestations have occurred to the west in Arkansas, Iowa, Kansas, Minnesota, Missouri and Oklahoma. They entered the country before 1912.

“The beetles like to eat the leaves and flowers of more than 300 plants and trees by eating the tissue between the veins,” says Bayer Advanced garden expert Lance Walheim, co-author of “Landscaping for Dummies.” “It’s a process called skeletonizing. That’s just another way of saying the pests like to destroy all of your hard work.”

Destructive Grubs Become Destructive Japanese Beetles
Japanese beetles start out as grubs that eat your grass roots in the spring. Symptoms include dead grass in brown patches. You can literally lift up the grass if you have serious damage. The grass wilts even when it’s watered. You’ll also see animals such as skunks and birds visiting your lawn to feed on the grubs.

By summer, the grubs become Japanese beetles that feed on flowers, plants and trees. By late summer and fall, Japanese beetles lay eggs that become grubs, and the destructive process begins all over again.

Bayer Advanced™ (bayer advanced.com) offers several DIY products that stop grubs before they destroy your lawn. Season- Long Grub Control protects your lawn during the critical spring, summer and fall feeding and development period. (This product isn’t registered in Long Island, New York.) The 24-Hour Grub Killer Plus (not available in California or Maine) kills grubs overnight if you discover a problem and need to act fast. The company also offers a number of other products that prevent Japanese beetles from damaging your garden or trees. Always read and follow all label directions.

One thing to keep in mind: Japanese beetles release chemicals called pheromones into the air that attract other beetles. So if you have a grub or Japanese beetle problem, Walheim says you need to attack it early. Otherwise, your landscape will suffer the consequences.

Bayer Advanced is a business unit of Bayer CropScience LP. Bayer (reg’d), the Bayer Cross (reg’d) and Bayer Advanced™ are trademarks of Bayer.