By: Marc Courtenay for www.PropertyManager.com a Service of AppFolio 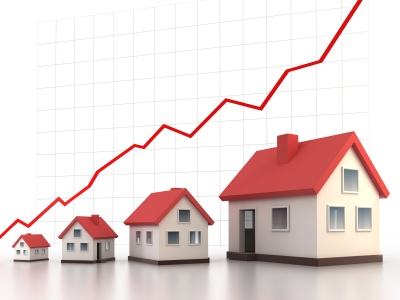 Just when the Federal Reserve needed some incentive to stimulate the economy or inaugurate a new and improved version of Quantitative Easing, the housing market showed yet another sign of rebounding. The S&P Case-Shiller 20-city housing report was issued on August 28, 2012 and it demonstrated yet another monthly improvement in the housing market across the U.S. The June index, which is not seasonally adjusted, showed that home prices increased 0.5% vs. an expected decline of 0.3%. On a month-over-month basis the index scored a 2.3% increase, the fourth consecutive monthly gain.

Consistent with this data was the CoreLogic data, which increased 2.5% in the past month. CoreLogic separates the distressed from non-distressed sales and covers more areas (572 areas vs. the Case-Shiller of 20 cities). And excluding the distressed homes, prices from CoreLogic showed a 3.2% increase. So, are prices going to continue to go higher? Is now the time to buy if indeed the expectations are for more increases in the monthly pricing index?

This is the first year-over-year increase in housing prices since 2006. In an interview recently, Robert Shiller who helped develop this index said he feels that we might be in the beginning stages of an ongoing appreciation in the price of houses. Yet he warned there are quite a few extenuating factors that may mean that the local and global economic malaise is still upon.  “We seem to have upward momentum…but there are a lot of clouds on the horizon too,” said Robert Shiller, economics professor at Yale and co-creator of the widely-followed index. Shiller says “there is really no way to know if home prices will continue to rise in the near future.”

The “storm clouds” affecting prices include the following unresolved issues:

No one knows for sure what the Federal Reserve is planning on doing to help support the housing recovery.  In a recent article I wrote for Seeking Alpha I address the mixed signals that Fed officials have been sending of late. “Seems like that topic changes from day to day. On Friday [August 24th] Chairman Bernanke said in a letter dated Aug. 22nd to California Republican Darrell Issa, the chairman of the House Oversight and Government Reform Committee, that the central bank has the ability to take additional steps to boost the economy. “There is scope for further action by the Federal Reserve to ease financial conditions and strengthen the recovery,” Bernanke reportedly wrote. “Bernanke also apparently repeated the statement from the Federal Open Market Committee’s Aug. 1 meeting that the Fed will provide “additional accommodation as needed.” He has a center-stage chance to speak more on his plans during an upcoming Aug. 31 speech at the Kansas City Fed’s annual economic symposium in Jackson Hole, Wyoming.”

Being a politically charged presidential election year would also make us take pause that if the Fed indeed wants to boost the economy and motivate home prices to increase further they may wait until the election which falls on the first Tuesday of November. Just because the recent housing data shows an encouraging recovery in the market, there’s no need to rush into buying, Shiller argued in the above referenced interview. “Housing market events take place over years,” he says. “The market usually doesn’t turn on a dime…you probably have years of time to get into this market.”

Property Managers may want to remind potential residents and owner-investors of Dr. Shiller’s comments. It bodes well for the continued preference toward renting that many cash-strapped Americans are exhibiting. Since it is harder than ever to qualify for a mortgage, and potential renters don’t trust the housing recovery news, they might have no choice for the time being but to choose rental housing. Rent prices are likely to remain stable or move higher in this environment, and that’s good news for the residential income property market.

Marc Courtenay (www.checkthemarkets.com) holds an MS in Psychology from California Polytechnic State University, and is a former senior vice-president of Investments for two major brokerage firms. Currently, he’s an investment publisher and analyst, as well as a financial editor, specializing in value stocks, precious metals, and emerging growth companies as well as the psychology of investing. In addition, he is a published author who has written a book and articles for investment newsletters. He has a special passion for the “Green Revolution” and is an avid believer in the “Green Economy” and all the profitable potential it holds for investors.