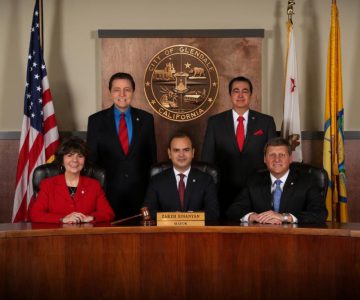 The Glendale City Council passed a rent freeze ordinance at 1:00 am on 11/28. The vote was 3-1 with City Councilwoman Paul Devine being the sole opposing vote. Councilman Vartan Gharpetian changed his vote to support the rent freeze once it was reduced from 6 months to 2 months after it becomes effective on December 27, 2018 and in exchange for staff drafting a Right to Lease ordinance to present to the City Council in February 2019. The rent freeze caps increases at 5% annually using base rents from September 18, 2018. Councilman Gharpetian also stated for the record that he would not vote for any extension of the rent freeze in February. There was strong agreement between all four City Councilmembers (Councilman Najarian had to recuse himself and leave the meeting) regarding a Right to Lease ordinance that would include the following elements: 1) 1 Year Written Lease offered to tenants, 2) Increases allowed up to 7%, 3) Increases above 7% would go to Mandatory Meduation to determine if justified (due to major repairs, renovations, mortgage interest increases, property taxes, insurance, utility rates, government assessments or fees), 4) if tenant unable to pay increases above 7%, then owner to pay relocation fees of 3 or 6 months of rent to tenant and 5) increases above 7% owner must provide 120 days prior notice.

Also, there was general agreement for creating new emergency rental vouchers using Measure S funds. Mayor Sinanyan also proposed a new fee against all owners of $50 or $100 per unit to go towards building affordable housing or towards new emergency rental vouchers. Mayor Sinanyan also proposed a new fee for real estate sales transaction of multifamily buildings. It is unclear why Mayor Sinanyan feels the need for these new fees given that Measure S passed providing the City with an additional $30 million per year and that the City already has over $700 million in reserves. These new fees would greatly harm mom & pop owners who use their building for their retirement and do not have deep pockets like corporate landlords that invest in multifamily rental housing as purely a commercial transaction. Mayor Sinanyan has no justification for these new fees and it is completely unfair to expect mom & pop owners to pay them. Further, mom & pop owners should be entirely excluded or pay substantially lower relocation fees due to the fact that mom and pop owners do not have the same financial resources as the large corporate owners that own hundreds or thousands of units. In addition, the new relocation fees should be limited to low-income tenants only. Otherwise the City would be unjustly enriching tenants that do not need relocation assistance.

We encourage all Glendale area members to thank Councilwoman Devine for standing firm against any rent freeze and Councilman Gharpetian for getting a commitment for a draft Right to Lease ordinance for February. We also encourage our members to educate Mayor Sinanyan and Councilman Agajanian as to the fact that any additional fees are unnecessary due to Measure S and the City’s reserves. These per unit fees, transaction fees and new relocation fees are unfair and will significantly harm mom & pop owners that do not have the same financial resources as large corporate owners with hundreds or thousands of units.