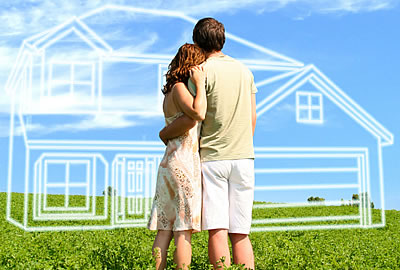 Erin Maude returned to homeownership in December, three years after losing her condo in the U.S. foreclosure crisis. This time, she’s confident she’ll keep the house she bought with the help of a 14 percent raise and a Federal Housing Administration loan, which required little money down.

“I’m very lucky,” said Maude, 38, an airline marketing manager. “Without FHA, I don’t know how long it would have been before I could have saved for a bigger down payment.”

Renters gaining confidence about the economy — those buying their first home, and people like Maude who are looking for a second chance — are jumping into the property market. Many are compensating for soaring starter-home prices with FHA loans that became cheaper after insurance premiums were cut last year. And they’re giving a lift to the U.S. homeownership rate, which rose in the second half of 2015 after steadily declining for almost two years.

An increase in apartment rents — which rose 4.6 percent nationally in the fourth quarter from a year earlier, according to Reis Inc. — also is helping drive young people to buy instead of lease. They’re entering a market with few affordable houses available. The U.S. inventory of starter homes — the bottom third of the market — is down 39 percent from three years ago, according to data from brokerage Redfin.

FHA-insured mortgages, used mostly by first-time buyers, nonetheless accounted for 22 percent of all loan originations in December, up from 17 percent a year earlier, according to data compiled by Ellie Mae Inc.

“The FHA insurance-premium cut pulled forward the day that first-time home buyers came back in a big way and turned around the homeownership rate,” Mark Zandi, chief economist for Moody’s Analytics Inc., said in a phone interview. The rate rose to 63.8 percent in the fourth quarter from 63.7 percent in the previous three months, the Census Bureau reported last week.

For the $2,400 monthly mortgage payment on her Kirkland, Washington, home, Maude gets twice as much space and is closer to the water than she was in the townhouse she rented for only $400 less — and it has a fenced-in backyard where her dog, Percy, can run. Maude, a marketing manager for Delta Air Lines Inc., put 4 percent down for her house, more than the 3.5 percent required by the FHA but less than the 20 percent typical for mortgages.

Maude lost her job and then her Atlanta condo three years ago in a short sale, a transaction in which lenders agree to accept less than what’s owed on the property. By November of last year, she was eligible to borrow again from the FHA.

She bought the Kirkland house in December, making a full-price offer of $422,000 the day after it went on the market. She knew, after six months of searching, that the supply of homes for sale was too tight to delay.

“There are now only two to four houses within 5 miles even on the market in the price range I was looking at,” Maude said in an interview.

Other Americans wanting to become homeowners haven’t been as lucky. Tight credit standards prevented 5.2 million mortgages from being made from 2009 to 2014, according to the Housing Finance Policy Center at the Urban Institute in Washington. That left fewer families able to buy at an opportune time in the market cycle and build the wealth that often comes with homeownership, the institute said in a report last month.

The FHA reduced annual mortgage-insurance premiums in January 2015 to make homebuying more affordable. The Department of Housing and Urban Development estimates the decrease in costs will save borrowers an average of $900 a year.

As a result of the mortgage-insurance decrease, FHA purchase originations increased more than 30,000 a month last year from 2014, said Sam Khater, deputy chief economist for CoreLogic Inc. That means that more than 250,000 first-time homebuyers were added to the market.

The increase in FHA loans brings added risk that would become apparent the next time the U.S. economy tumbles, according to Stephen Oliner, a resident scholar at the American Enterprise Institute in Washington who worked at the Federal Reserve Board of Governors in Washington for more than 25 years. With prices rising, borrowers have been gravitating toward government-guaranteed loans, mainly from the FHA, that require only small down payments and allow high monthly payments relative to a borrower’s income, Oliner said.

“Since the federal government is guaranteeing these loans, there isn’t much market discipline to prevent risky loans from being made,” Oliner said.

A look at loans of all types originated in the past six years shows they are “pristine” and have the lowest default rates in almost two decades, Khater said. FHA loans that are at least 90 days delinquent were up only slightly, with an increase of just 0.05 percent in fiscal 2015 from a year earlier, he said.

Rob Nunziata, chief executive officer of FBC Mortgage LLC in Orlando, Florida, said lenders are feeling more confident as the real estate market recovers. In the past year, his firm has dropped its minimum credit score for a FHA mortgage to 580 from 640.

“Credit standards were a little too tight — now they’re easing toward a more acceptable level,” Nunziata said. “Defaults have decreased, the economy is doing better and the housing market has stabilized.”