By Jon Coupal | President of the Howard Jarvis Taxpayers Association 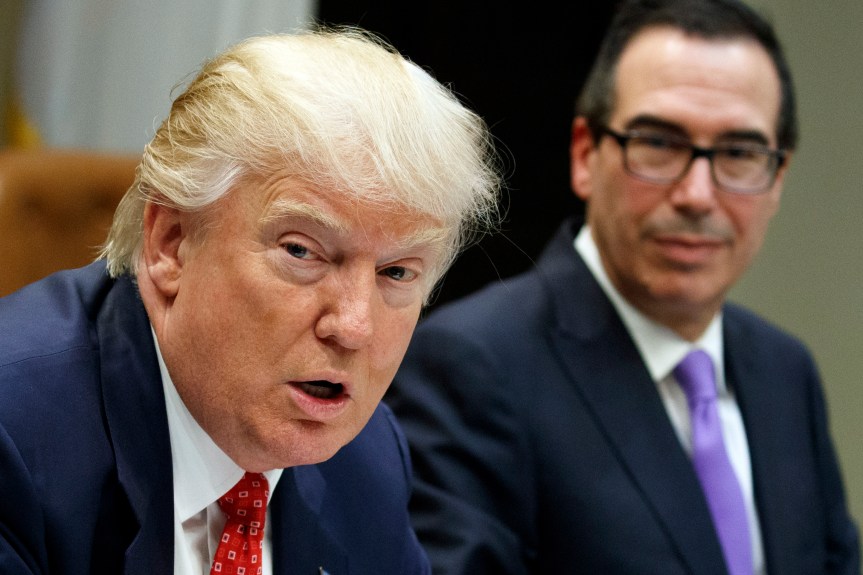 AP Photo/Evan Vucci | In this Feb. 22, 2017, file photo, Treasury Secretary Steven Mnuchin listens at right as President Donald Trump speaks during a meeting on the Federal budget in the Roosevelt Room of the White House in Washington. Trump wants to tackle tax reform, but the loss on health care deals a blow to that effort.

As most people are now painfully aware, California’s progressive political majority has just hit middle-class taxpayers with billions of dollars in new taxes. As a direct result of these actions, the state will soon have the distinction of having the highest taxes in the nation in the following categories: Highest income tax rate; highest state sales tax rate; highest vehicle tax; and the highest gas tax (and that doesn’t even include the added costs of cap-and-trade regulation). For the wealthy, California can be a lovely place to live. For normal folks, life in the Golden State can be a struggle. According to a recent article in the Sacramento Bee, California lost more than 1 million people in net domestic outmigration between 2004 and 2013.

Other than leaving the state, perhaps the only relief available for California’s middle class is tax reform at the federal level. And while there’s a lot to love in the “Unified Framework for Fixing Our Broken Tax Code” embraced by both President Trump and the Congressional Republican leadership, there is also a very big caveat.

First, the good stuff. The plan calls for lowering the income tax rates for individuals and families. It would shrink the current seven tax brackets into three — 12 percent, 25 percent and 35 percent — with the potential for an additional top rate for the highest-income taxpayers.

Second, it would roughly double the standard deduction so that typical middle-class families will keep more of their paycheck. The plan also significantly increases the Child Tax Credit.

Fourth, it repeals the death tax and Alternative Minimum Tax which forces many Americans to calculate their taxes twice.

In addition to helping middle-class Californians, the reform package would also help the state’s small businesses by limiting the maximum tax rate for small and family-owned businesses to 25 percent — significantly lower than the top rate that these businesses pay today.

For larger businesses and corporations, the framework reduces the corporate tax rate to 20 percent — below the 22.5 percent average of the industrialized world. It also ends the perverse incentive to offshore jobs and keep foreign profits overseas.

Finally, in a commonsense proposal, the framework would allow “repatriation” of American dollars by imposing a one-time, low tax rate on wealth that has already accumulated overseas so there is no tax incentive to keeping the money offshore.

Now, here’s what will undoubtedly cause some Californians heartburn. The proposal calls for the elimination of the deduction for state and local taxes. Currently, Californians are able to deduct from their federal tax returns both property taxes paid to local governments and income taxes paid to the state. Because California is a high tax state, the loss of the deduction would be very significant. In fact, some estimates show that Californians, in total, currently deduct over $100 billion in taxes from their federal tax liability.

Losing this deduction will have less of an impact on working families and the middle class, particularly when balanced against the middle class tax relief under the framework. But as one moves up the economic ladder, California’s more wealthy taxpayers will take a bigger hit.

While some have suggested that the Republican Tax Reform Framework is revenge against high tax, mostly Democrat controlled, states, the reality is that there are legitimate policy reasons for reducing or eliminating the deduction. In essence, low tax states are currently subsidizing high tax states with funding the federal government.

Moreover, the loss of this deduction might spur high tax states like California to rethink their own tax policy and pursue lower taxes as part of tax reform efforts at the state level. In California, that is long overdue.

Finally, a bit of irony for high-tax California. Because property taxes are included as part of the federal deduction, if it were not for Proposition 13, Californians would be threatened with an even greater loss of deductibility. So as bad as getting rid of the deduction might be for some, it could be worse. And for that, we can thank Prop. 13 which, once again, rides to the rescue of California taxpayers.